First calf came in early June, by my calculations 2-3 weeks premature. The mother cow was quite protective and adopted an aggressive attitude , bellowing loudly, ears pricked up and eyes widened showing a lot of white around the iris when I approached . I found them in the pasture when the calf was probably 10 minutes old judging by the amniotic fluid slicked coat, took some pictures and moved on. Being the first calf of the year there was more than the usual interest from other animals including one of the young bulls who had probably never seen a newborn calf, came back 10 minutes later and the calf is standing, partly dried off by the mother licking the calf's coat, much as I wanted to stay and watch cow calf bonding this was the time to back off and allow the calf to find her way to the udder for colostrum, vitally necessary for immune protection as the calf acquires immunity through colostrum as soon as possible , beyond 6 hours the mortality rate is very high.

Six more calves have arrived since then, some a result of artificial insemination, others from a clean up bull immediately afterwards, hopefully many more in the next 2-3 weeks. Finding them can be difficult and moving into a different pasture requires a keen observation to make sure calves and mothers are not separated which is quite easy in long grass and calves who sleep most of the day and mothers off feeding. Young calves often do not recognize their mothers and it can be hard or near impossible to link a calf with a cow especially if it is a first time mother and the bonding instinct is slow, the young cow being traumatized by the birth, seeing something strange on the ground making strange noises and the mother hungry and thirsty can often lead to separations while calf attempts to get milk from other cows who push the calf away,,,, anyway, so far, so good. 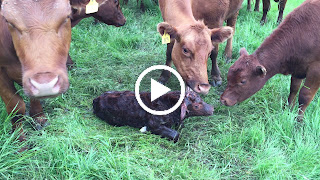 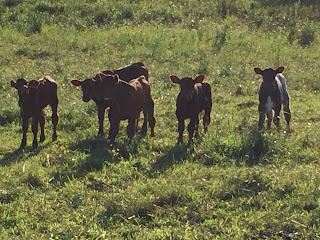