Why a Vegan should keep Cattle; Grass Fed Beef - An Environmental Solution


Why a vegan should keep cattle!

Grass fed beef farmers are amongst the most ardent and effective environmentalists but we have not been effective in explaining the substantial benefits that 100% grass fed beef has on the environment.
This is in contrast to environmentalist organisations, anti-meat advocates and headline grabbing announcements from the Food and Agricultural Organization (FAO).

As a grass fed beef farmer I am not here to defend the case of grass fed (finished) beef; the negative press towards livestock agriculture should be confined to the concentrated animal feeding operations (CAFO) from which the developed world obtains up to 99% of its meat and eggs. It should be noted that the beef side of CAFO is probably the least environmentally damaging and is more morally justified compared to pigs, poultry and dairy but still not equivalent to the ethos of 100% grass fed cattle. The negative environmental press regarding the contribution of cattle to green house gases (GHG) amongst other detrimental effects is applicable to feedlot cattle which do not have the mitigating factor of vegetative grassland on GHG and also in the third world which may not have many feedlots but also do not have the mitigating factor of planned controlled grazing in vegetative grassland. The two countries with the largest numbers of cattle are India and Brazil, often with poor quality pasture and therefore overall high cattle associated GHG emissions.

The negative perception of beef is pervasive and assumes all beef is equal; this is not only untrue but exclusively grass fed beef in controlled planned grazing has substantial beneficial effect on the environment and is a potential solution to excessive anthropogenic GHG emissions. Climate change has produced a paralysis of action amongst states despite their promises, or minimal actions to take place over decades, a head in the sand approach or the refuge of climate change denial. By returning to or maintaining best farming practices thereby restoring natural habitats, the earth can restore itself. Grazing animals in particular cattle but also sheep, goats and restoration of wild herds of bison, antelopes, wildebeest and zebras etc can all play a part in this. 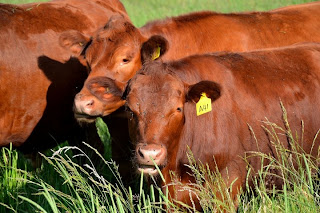 There is substantial hope for the environment through proper grazing management of ruminants especially cattle. The value of grass fed beef is not just the relative health benefits, local economic development, food production or enhancing landscape vistas but potentially stabilizing or even reversing atmospheric CO2 in combination with other land use changes. Vegans, animal lovers and others can also partake in a proper managed grazing setting with cattle and other ruminates balancing the joint care of animals and the environment. The unifying answer to all of this is soil.

Soil contains 2500 gigatons (2500 billion tons) of carbon, more than three times the amount of carbon in the atmosphere and more than five times the amount of carbon in plants and animals. Atmospheric CO2 (400 ppm today) is increasing by 3.5 gigatons a year. 60% of soil carbon is organic carbon which exchanges between the atmosphere and the soil via plant photosynthesis, respiration and decomposition. While there is a slight overall net gain to the soil this gain is unfortunately more than offset by current land use and human activity. By changing land use we can seriously address anthropogenic climate change. 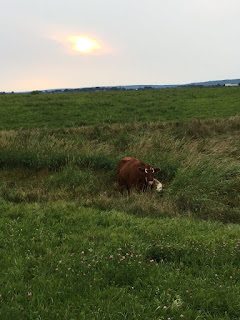 Soil organic matter is directly related to soil organic carbon and is composed of soil microbes and decomposed material (humus). Soil carbon deposit occurs through root growth and death as well as plant litter at the surface. A symbiotic exchange of carbon occurs between plant roots and fungi in exchange for minerals. Fungal mycorrhizae can extend the reach of plants a hundred fold and plants in symbiotic relationship with mycorrhizae transfer 15 times more carbon into soil than do plants without mycorrhizae. In turn these plants are healthier, more productive and more disease resistant and as a consequence are more effective at photosynthesis and carbon capture. Other soil micro-organisms such as nematodes, protozoa, ants, micro-arthropods as well as bacteria and other fungi have as yet undetermined but probably beneficial co-operative roles. The above is nothing new, all children learn this at school yet the significance of it is under-estimated. Much remains to be discovered, in fact Glomalin which is a 30-40% stable carbon soil substance was only discovered in 1996. Glomalin is an aggregator, forming larger aggregates, making soil resistant to wind and water erosion, it helps O2 infiltration/transport and aids in nutrient transfer.

Increasing soil carbon by 1% would reduce atmospheric CO2 by 2%. Global organic farming has the potential to sequester 1.5 gigatons of carbon per year. By optimising soil carbon sequestration through natural non-resource dependent means we can mitigate climate change and stabilise food-   precarious communities even countries . To paraphrase someone who will not be named lets  'make earth great again'. The reader may regard this as wishful thinking but soil carbon sequestration through environmentally sustainable farming bears examination in detail as it will beneficially affect our children and their children instead of condemning them to the previous generations misuse of our most valuable and vital resource.

Plowing leaves soil exposed leading to wind and water erosion; kills microbes by exposing them to heat and light; destroys crop residues on the soil surface causing loss of nutrients and organic matter. Turning soil over causes sudden access to O2 which speeds up biochemical deposition releasing carbon into the air rather than back into the soil. Even conservation tillage (zero tillage) and high disturbance mechanical seeding cause soil erosion. Pesticides, fungicides and weedkillers are needed to control weeds and diseases that occur in degraded soil. A plant will take up commercial fertilizer in preference to exchanging minerals with fungi leading to carbon sequestration.

The world's agricultural soil carbon has decreased by 50-70%, this has accelerated over the past few decades but can also be tracked back over many centuries, some estimates are that 50% of land under cultivation will be unsuitable for this purpose in 50 years. Soil exhaustion contributed to the demise of the Roman, Greek and Mayan empires and was a contributory factor to the Arab Spring uprisings, the consequences of which are very evident today. Exhausted crop land is often then turned over to livestock grazing which if done improperly (which is usually the case) it either just stabilizes fertility or decreases it giving the false impression that livestock was responsible for the soil degradation.


The Herd effect and the Farmer-Predator

It is estimated that there were 60 million bison in North America prior to the arrival of Europeans, add in other ruminate animals, including now extinct species and you have numbers similar to the number of cattle today. To protect themselves against predators, in any part of the world, grazing animals stay in herds, this instinct is still present today in cattle where the dominant animals stay in the middle of the herd even where there are no predators but some perceived threat. Planned grazing of animals mimics the herd effect by confining animals through fencing in small pastures and then moving them in short time intervals from hours to a maximum 3-4 days. 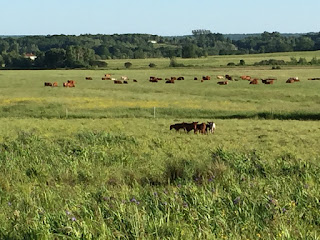 Livestock remove leaves and stems just above the growth point of grass allowing sunlight to reach the growth point. During the rest period when the herd has moved on, the grazed grass plant balances by shedding roots, releasing carbon and then regrows above and below the ground through photosynthesis and mycorrhizal nutrient and carbon exchange. In the absence of grazing, plants accumulate litter, which chokes growth points and new shoots. The un-grazed grass is slowly oxidized and the animal dependent perennial grass becomes less productive and has decreased diversity of fauna. These grasses are often replaced by woody tap plants or in arid areas by desert bushes and bare soil.

Even in good grassland properly timed short interval intensive grazing followed by long rest periods (from a month to a year depending on climate) can increase vegetation by 45%, this new vegetative growth in response to grazing is particularly effective for soil carbon sequestration. It is the absence of grazing animals rather than their presence that has caused land to become decertified or less productive. Leaving it to nature doesn't work because ecosystems are not natural anymore following removal of grazing animals or improper grazing. Properly managed grasslands, which requires grazing animals have a higher plant diversity and better wildlife habitat. Grassland grazing by cattle and other ruminants has a side benefit of creating an aesthetic scenery instead of or in conjunction with forestry and monoculture cropland. By re-establishing and repairing an ecosystem using the natural behaviours of cattle in combination with other land use changes we will provide a way out of our climate change dilemma.

Topics for my next blog will include agriculture generated methane and nitrogen oxides; cattle and water resources; opposition and competition to grass finished beef by vegans and commercial feedlot beef.
All photographs in this blog were taken on my farm in Nova Scotia, Canada.
December 28th, 2016